Home » Sports » Kobe Bryant Can Take Care Of Your Feet

Kobe Bryant Can Take Care Of Your Feet

Posted by Karlo Samson on September 24, 2016 in Sports, Style | Leave a comment

As the world bids see ya later to Kobe Bryant as he retires from professional basketball, it’s only fitting for the Black Mamba to have awesome merch for fans to commemorate his illustrious 20-year career. Premium sock brand and official sock supplier to the NBA, Stance, has just the thing for a discerning Kobe fan’s feet: the Stance X Kobe collection.

Collaborating with the man himself, Stance has just released the collection’s three styles, dubbed, “The Final,” “K. Bryant,” and “Kobe Faces.” “The Final” is distinctive in its purple, gold and white color combo, with the numerals 2 and 4 on the right sock and left sock, respectively. Underfoot are the years 1996 and 2016, bookending the man’s twenty year reign. This is the performance sock of the collection, built upon Stance’s signature NBA performance sock, with advanced wicking and cushioning specially designed for the demands of the court. This was the sock worn on-court by the LA Lakers when they battled Golden State last March. The two other styles are lifestyle pieces, designed less for the court and more for casual wear. “K. Bryant” is a novelty sock, featuring caricatures of Bryant in two different stages of his career: the left depicting the younger Bryant wearing a No. 8 jersey, classic hair and goatee, the right showing an older, wiser, shorter-haired Bryant, showing off his No. 24 and his famous jutting jawline.

“Kobe Faces,” on the other hand – er, foot? – is inspired by the duality of Bryant’s HeroVillain line, with the left and right sides of Bryant’s face in a black/purple/gold/white mismatched colorway, complemented by the Chinese characters for “Hero” and “Villain” on the backs.

While these three styles are available individually, 24 lucky fans were given the chance during last Saturday’s launch to purchase the Stance X Kobe Collection Limited Edition boxed set – just 24 units allocated for the entire country. Packaged in a handsome vertical case, each set included all three styles of the collection. I imagine those fortunate fans keeping their loot pristine, though, their socks unused and preserved for collectibility’s sake. If you’re fan enough, you would buy a duplicate set to wear anyway.

The Stance X Kobe Collection is available now at Sneakpeek branches, and soon at their mall kiosks and affiliated stores. But I don’t think those fine foot gloves will stay on the rack for long. Too many fans of Kobe Bryant in this basketball- crazy country, right? 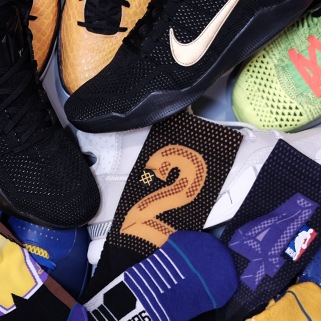 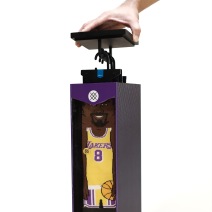 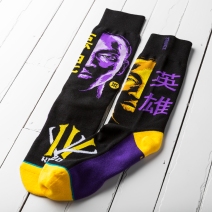 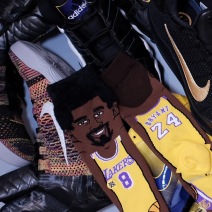