Home » Entertainment » Serena Williams has our back 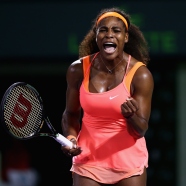 Serena Williams has our back

Posted by Karlo Samson on November 28, 2015 in Entertainment, Events, Sports | Leave a comment

Just a few days left until tennis fever heats up Manila with the Philippine leg of the International Premiere Tennis League (IPTL), and, boy, does this second season promise fireworks on the court.

Serena Williams, Momma Smash herself, will be headlining the Philippine Mavericks team. Williams is currently the top player in the Women’s Tennis Association (WTA), an unstoppable powerhouse with a racket. She’s won the most major singles, doubles, and mixed doubles titles combined for active players, male or female. Her assault on the four major tennis competitions, also known as the Grand Slam—the Australian Open, the French Open, Wimbledon and the US Open, played in that order—has elevated Williams to such lofty status that winning four of those tournaments in a row is now referred to as a “Serena Slam”.

The Mavericks will be going up against league teams from Japan, India, Singapore and the UAE, who have their own respective superstars on their squads, so Philippine tennis fans can expect a great three days in December.

As a major sponsor of the event, broadband service PLDT Home Fibr has extended a serious perk for its subscribers, giving them a 20 percent discount off Philippine tickets. They also get a chance to win VIP tickets complete with a red carpet treatment—two-way rides via the luxury car service Uber Black so that they can arrive at MOA Arena and go home in style. Not bad, no?

The Philippine leg of the IPTL will be held this December 6 to 8 at the Mall of Asia Arena. That’s just a week away so grab your tickets soon!

← Screw Bazaars, Tech Sales are More Fun We Can’t Afford to Lose the Race to Extinction →