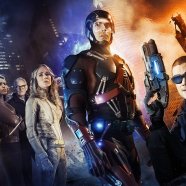 Posted by Karlo Samson on January 19, 2016 in Entertainment, Geek | Leave a comment 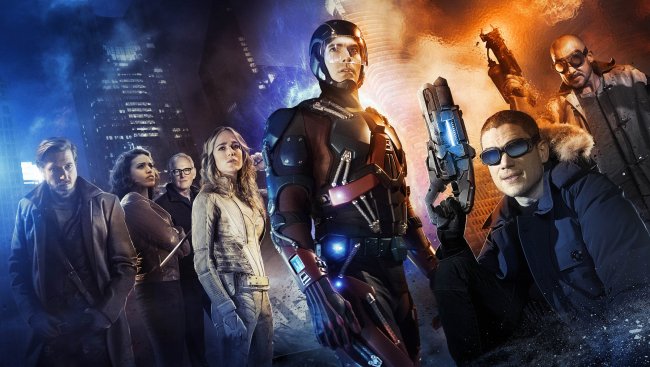 If you’re a true fan of Arrow and The Flash, then you’re probably dying to see the latest series in DC Comics’ television universe, DC’s Legends of Tomorrow. Thanks to our good friends at Warner TV, I was able to watch the sneak preview of the first episode a full two days before the worldwide premiere. As expected, the first episode was a fun romp – it sets up the series with enough information (a lot) for people to jump in, even if you’ve never seen Arrow or The Flash, and leaves you wanting, cliffhanger-style, for more.

I’m not supposed to give away any details from the show – no spoilers – but here are some things I can share with you. 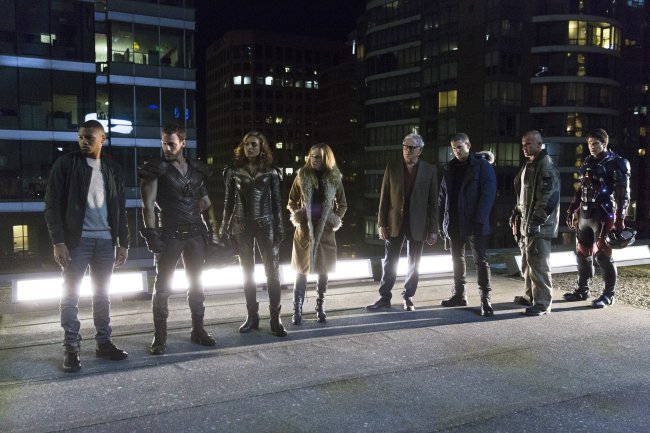 1. It’s a team show.
But you already knew that. If, however, you’re a DC virgin, this is the series premise. The future of the world is the violent and utter subjugation of the planet by immortal villain Vandal Savage. To prevent this, Time Master Rip Hunter travels back in time 150 years to assemble a superteam of heroes and villains to stop Savage before his ultimate victory in 2166. Hunter quite literally collects folks we’ve seen before on Arrow and The Flash: Ray Palmer aka The Atom, Sara Lance aka White Canary, Professor Martin Stein and Jax Jackson who merge to form Firestorm, Hawkman and Hawkgirl, and the half-brothers Leonard Snart and Mick Rory aka villains Captain Cold and Heat Wave. Together, they travel across time to foil the schemes of Vandal Savage before the height of his power and, ahem, save the world.

2. There will be 16 episodes in the first season.
What we don’t know is whether we will have a mid-season break, as seems de rigueur in televisionland of late. We’ve gotten hints that the first season is one single arc. While the episodes promise to be a smorgasbord of different adventures, each one will push the story arc forward. 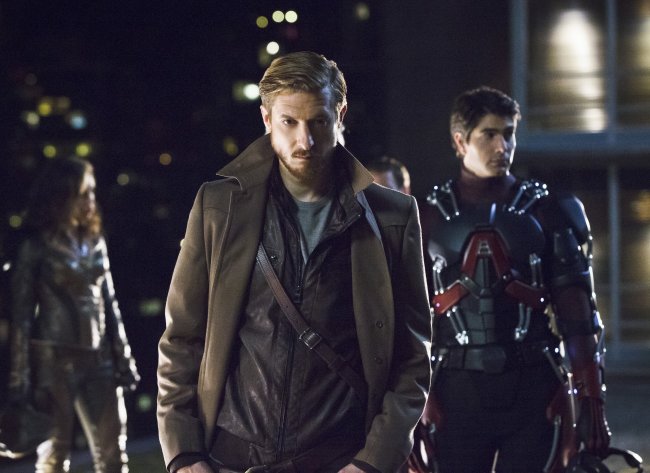 3. Rip Hunter does not have a sonic screwdriver (but he does have a tool).
Fanboys will inevitably compare DC’s Legends of Tomorrow with that other popular time-traveling series Doctor Who. Time machine, check. Time Lords, different name but check. Cybermen, sorta. Then there is Arthur Darvill in the lead role as Rip Hunter, a time-traveling Brit. Sounds suspiciously like Doctor Who’s Rory Williams, no? Was this a bit of stunt casting on the producers’ part? Who knows? What we can probably predict is that we’ll be seeing far more of Vancouver (where Legends is shot) than Wales.

4. Time is not immutable.
The rules of time travel in Legends seem to follow those of the Back to the Future, which is a good thing because BTTF is largely hailed as the best time travel movie of, you know, forever? Time itself will fiercely resist any changes, but the future is not written in stone. It is interesting how Rip Hunter determines exactly when they can re-enter the space-time continuum. Watch out for that scene.

5. Vandal Savage is played by recurring guest star Casper Crump.
Aside from the fact that Vandal Savage is an infinitely more intimidating name than Casper Crump, the official press material refers to Crump as a “recurring guest star.” While we can’t be entirely sure, this likely means that we won’t see Vandal Savage in every episode of the series. That should be fine, because having him in every episode would make this series feel like He-Man and the Masters of the Universe or any of them other iconic 80s cartoons. 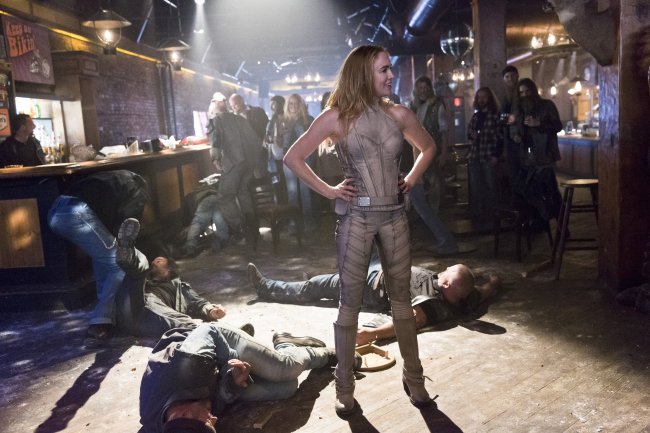 6. White Canary’s suit was designed by Cisco Ramon.
Which likely means that the suit has some tech tricks up its sleeves. Oh wait, no sleeves. You know what I mean. It does have a utility belt that doesn’t look like it was designed by Rob Liefeld (whew!). Compared with Black Canary’s black bondage suit, this outfit seems genuinely easier to move and groove in (cue 70s dance music). 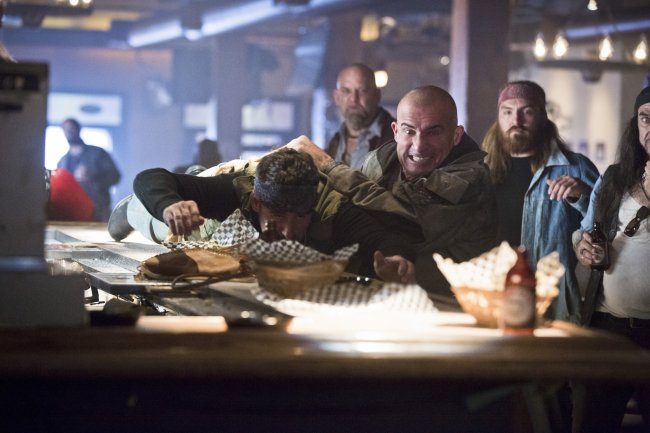 7. The team’s malcontents get the best lines.
It’s immensely enjoyable to watch Wentworth Miller and Dominic Purcell reprise their roles as the villains Captain Cold and Heat Wave. Among the cast, these two play self-serving with a true comic book flair. Purcell, in particular, has fun with a role that previously played second fiddle to Miller’s. He’s the character kids will love to play. 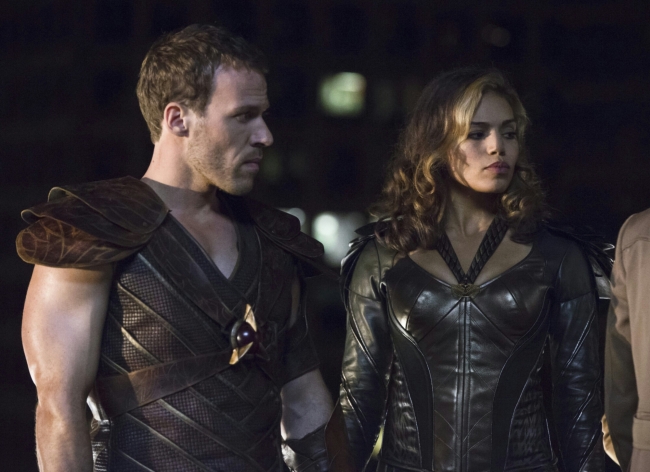 8. Hawkman and Hawkgirl still have that weird, creepy dynamic.
When Kendra Saunders makes her first appearance in The Flash, she has no memory of her past lives and her millennia-long relationship with Carter Hall, even when she awakens as Hawkgirl. Back then, Hall came off as an imposing boyfriend at best, and a stalker at worst. In Legends, Kendra continues to exist under a cloud of cluelessness for the most part and Hall is still a douche. The good part is that the writers seem to have a plan for the two characters, and the first episode manages to make them more sympathetic. 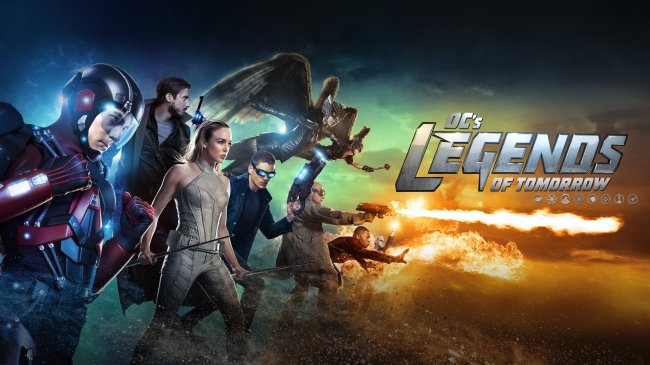 Some Questions We’d Like Answered
The first episode succeeds in whetting your appetite for more. While we do have questions we’d love to ask here, that might give away some of the plot. Here are a few we can pose.

Will the Flash and the Green Arrow make appearances on DC’s Legends of Tomorrow and vice versa?
Marianne Lee, the VP for content at Turner International Asia Pacific, mothership of Warner TV, isn’t at liberty to say. She’s only seen up to episode 3 and says that the producers of the show are keeping their secrets close. Based on the history of Arrow and The Flash, though, I’d say there is a strong possibility. You have to remember that the characters of DC’s Legends of Tomorrow were introduced in the two earlier series – some would call the Vandal Savage crossover episodes last year a backdoor pilot – so it wouldn’t come as a surprise if paths cross further into all three series.

What time periods will we see in the show?
The series trailer already revealed that our intrepid legends go back in time to the 70s, but what other eras will we see them desperately try not to alter? I’d pay good money to see them travel to Roman times, to give a wink and tip of the hat to Arthur Darville’s other time-traveling character Rory Williams from Doctor Who.

What tone will the show have?
Arrow established itself from the get-go as a dark, gritty, but-it’s-not-Batman show. The Flash carved out a happier, more optimistic Central City. Legend’s tone, however, isn’t that obvious. There’s a lot of information to take in and I think that the tone was sacrificed for exposition. It seems like great fun, but I’m interested in seeing what directions Berlanti can take this to make it distinct from its sibling shows.

Where does everyone keep their luggage?
Do all super heroes travel without luggage? When they embark on their time-traveling adventures, none of them has so much as an overnight bag. Presumably, Ray Palmer’s ATOM suit shrinks down to pocket-size, but where do they all keep clean undies?

← Are You Ready for the Plus Six Three Festival? Converse Previews Spring/Summer 2016 Collections →